An Unexpected Experiment with Linux

My work laptop had a failure over the weekend. It wouldn't boot up into Windows, and after some fearful research, I discovered that the Windows registry seemed corrupted. So there I was, with an unusable laptop. Or was it?

I'm a big fan of live CDs, CD-ROMs (and lately, DVD-ROMs) containing full OS distributions that a PC or a laptop can directly boot from. It's a neat way to look at an alternative operating system environment without the commitment of installing the OS on your hard drive.

With my laptop in its unbootable state, I downloaded the latest Kubuntu live CD "iso", burned it to a CD, and then booted my laptop with it. The cool dark blue screen of KDE appeared, and instantly my laptop had a second lease on life! (And as a bonus, Kubuntu was able to recognize my wireless network without me diving into configuration files.) 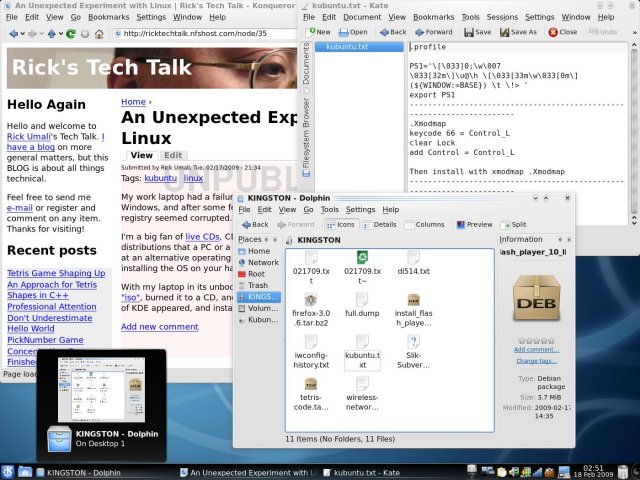 I have been in Kubuntu for the past two days and it feels OK as a desktop replacement for Windows. Konqueror can be made to support Flash, but it has terrible support for Google mail (that said, a quick download of Firefox addresses that). Other than that, I've been mostly happy. This unexpected experiment is saving my bacon though if I had to live in Kubuntu for any length of time, I'd have to get Eclipse and SVN working just the way I like it.

(I'll be back in Windows soon enough though. Since this is a work laptop, the fine folks in IT ran their diagnostics and said they'd be replacing the hard drive.)